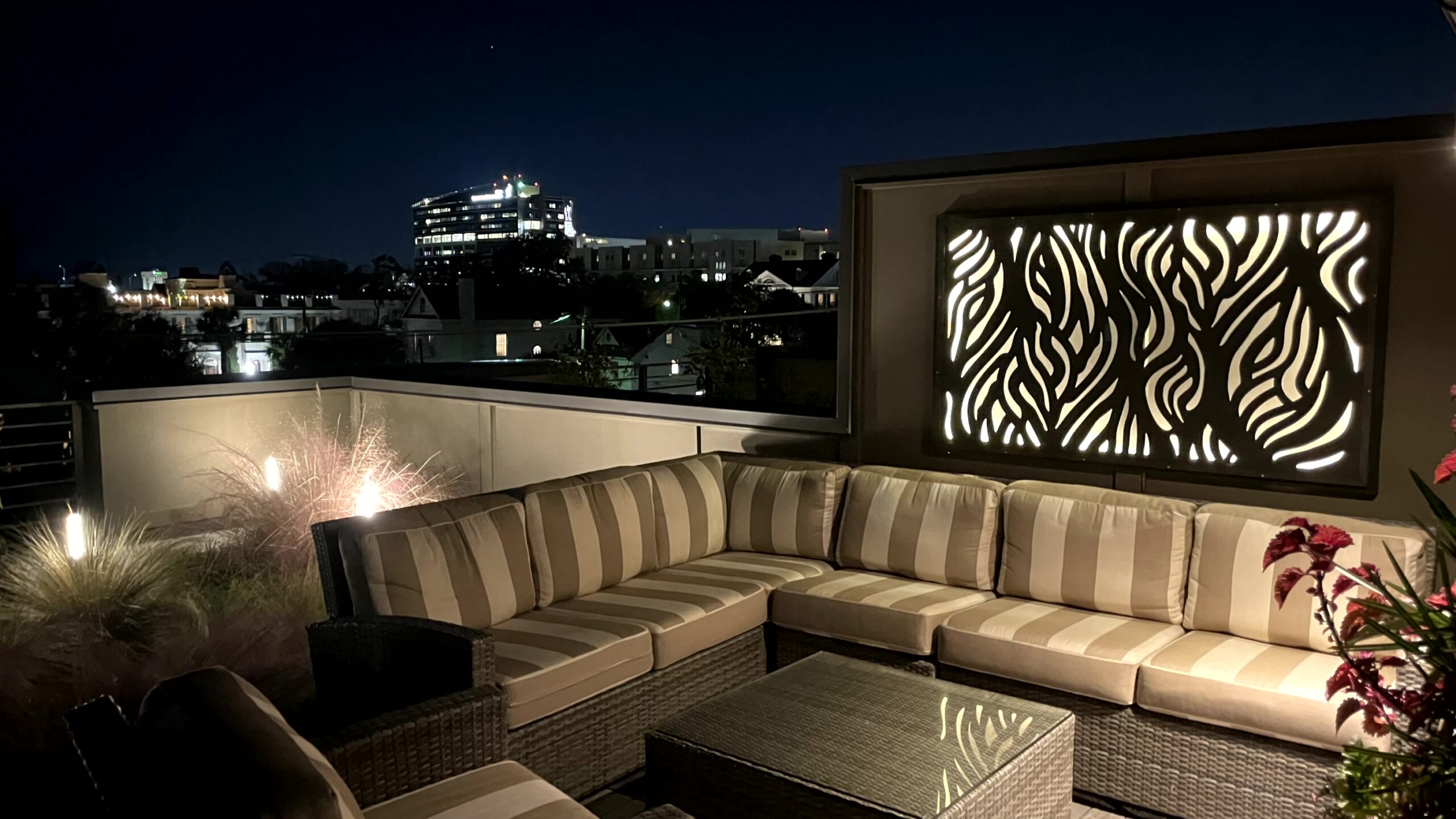 During a recent lighting consultation, we found ourselves atop an amazing Charleston rooftop garden surrounded by some of the most spectacular views of the Holy City. The decking is composed of decorative ipe wooden tiles. Both sides of the garden are flanked by natural native grasses, currently in bloom. While an array of planters filled with seasonal color are spread throughout the garden. This rooftop also bodes a seating area that was in dire need of a focal point. It’s the perfect location to take in the Charleston sunset with a beverage in hand. All it needed was a touch of Moonlighting landscape lighting.

Here lies the challenge. How do you tastefully introduce light into a bed full of grasses? How do you create a focal point in a seating area full of negative space? With limited space, how can we make an impact without overpowering the garden and still allow the Charleston skyline to be star of the show?

The illumination of grasses is not an easy task. We chose to introduce a small bollard, with modern flare to match the theme of the garden and desired style of the homeowners. We methodically placed them behind the taller grasses which helped create a glow and softly blanket the planting beds with a low layer of light. The placement of these bollards created natural definition of the space and a sense of depth. All the while, keeping the light levels low here still allows the eye to enjoy the unobstructed views.

As for the seating area, it was quite literally a blank canvas. A blank wall served as the backdrop behind the outdoor furniture. The wall needed a focal point. We introduced a decorative screen with a custom pattern that was a perfect marriage for the space. We would essentially frame this screen and illuminate it from the inside and allow it to serve as a piece of art and a new focal point for the space for both daytime and evening enjoyment.

If Moonlighting can help add a touch of creativity to your home contact our office and schedule a consultation today with our team of designers.

Originally constructed in 1840, the historic Charleston Visitors Center has taken on a new look.

Listed as a National Historic Landmark, the visitors center opened to the public in 1991 and has been a hub for Charleston tourism ever since. Along with a full scale renovation of the building, the landscape also received the same treatment led by Charleston landscape architect Glen Gardner. 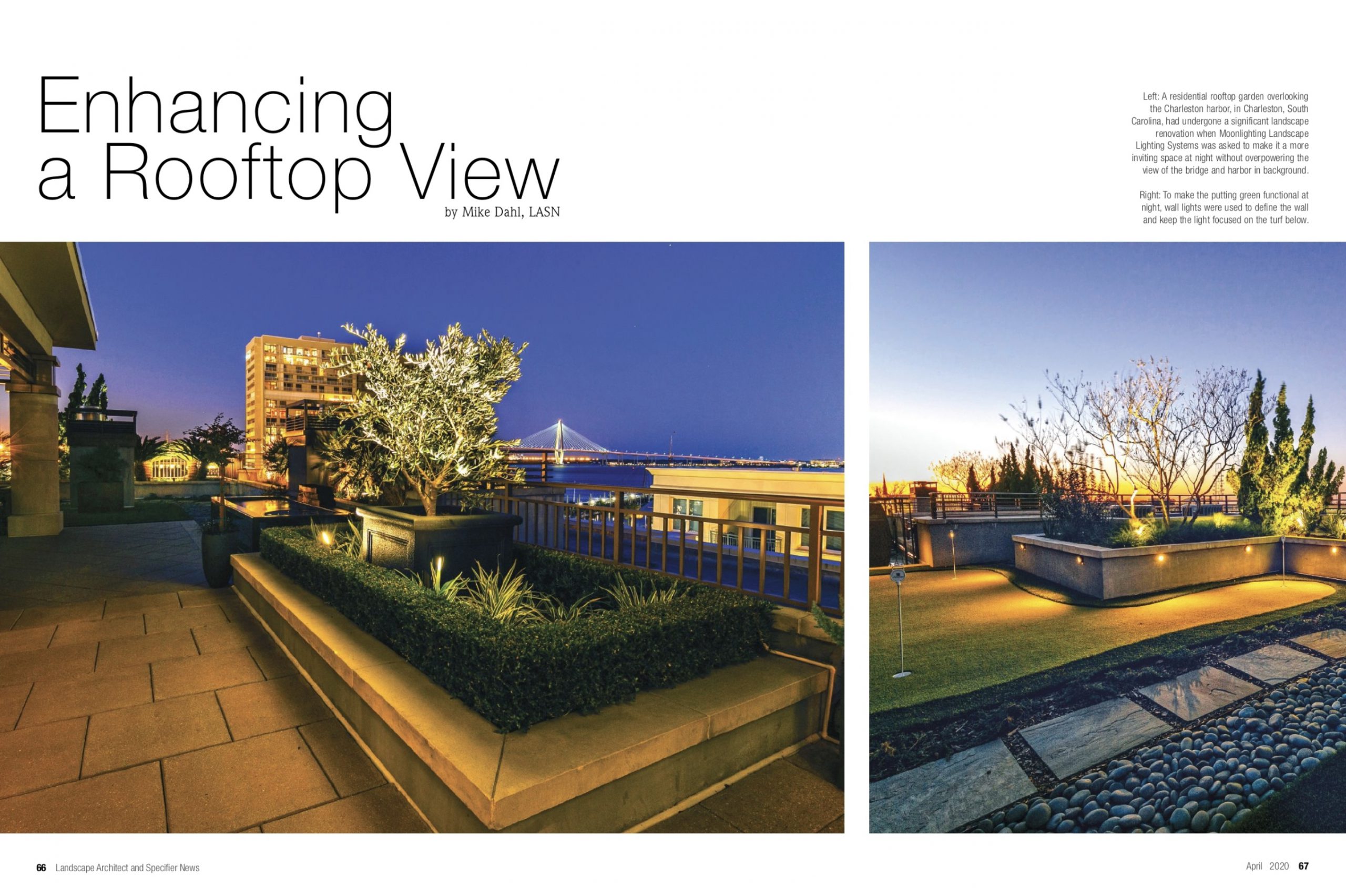 We’re excited  to share an amazing project with you that was just recently featured in the April issue of Landscape Architect and Specifier News magazine.

Completed in early 2018, the landscape lighting was designed for an incredible rooftop garden which features some of the most breathtaking views the Holy City has to offer overlooking the Charleston harbor.

To learn more about this details of this incredible project, click here for the full article and let us know what you think! Aslo, feel free to venture over to our Houzz page and see some additional photos of this project.

How do you light a tree with landscape lighting? Well…that’s a trick question. Not every tree is created equal and not every tree calls for the same application as the next. We’re here to help explain.

Where we are located in Charleston, South Carolina,  we see a wide variety of trees on our projects ranging from live oak trees, palmetto trees, crape myrtles and olive trees just to name a few. Whether it be new construction where newly planted trees have been installed or it’s an existing landscape where trees have had years to blossom and mature, our knowledgeable design staff is always prepared for the best design techniques to best illuminate your trees.

In this blog post, we’re going to show you a beautiful live oak tree illuminated in three very different ways.

Let’s start with the most basic method.

In this photo we have positioned three fixtures on the ground, about 30′ away from the tree and aimed them to illuminate the tree. In the big picture, the whole tree is illuminated and it’s being shown off in all of its beauty. Essentially, it’s the easiest way to illuminate this tree while still accomplishing a positive effect. While still very effective, we can probably do a little better and create a little more interest within this scene.

For the “grazing” technique, we’ve positioned three up lights closer to the tree than what you see in the previous photo and focused on the limb structure of the tree. This allows you have a better visual of the detail of the tree and limb structure.

Tree Mounted Up & Down Lighting:

Let’s say this tree is in a high traffic area and we need to keep fixtures off the ground so they don’t become a hindrance, thats where this technique comes into play. In this photo, the oak is illuminated with fixtures all mounted within the tree itself. We have two fixtures mounted about 15′ up, aimed up into the canopy while we have three down lights, mounted at about 35′ aimed down. One is aimed through the center of the tree, picking up the trunk while the other two are picking up the right and left side of the tree. The down lights as a whole create some great shadowing on the ground plane below. We’re again focusing on the detail of the tree and further enhancing what makes the oak tree the specimen tree that it is. What we’re accomplishing here is illuminating the top parts of the limbs that cannot be picked up by just simply up lighting.

By combining up lighting and down lighting, we’re painting a multidimensional picture as opposed to the one dimensional technique you see with the first two techniques.

If you want to see this in person… you can find it at the Addlestone Library on the College of Charleston campus where it permanently illuminated with technique No. 3 (tree mounted up and down lighting.) Because it is in fact in a very high traffic area, that is why we elected to design with this method.

Contact our office today and schedule a consultation with one of our award winning designers and learn more about how Moonlighting can assist in creating a custom landscape lighting design for your home or business.

Moonlighting recently took part in a company outing and it was one for the ages! Moonlighting President (and BMW owner) Mike Rollins had always wanted to see what it was like to take on the BMW Performance Center. With months of planning he made that a reality… for the entire company!

We decided to close the office for two days and make the trek to Spartanburg, S.C. where the BMW Performance Center is located, along with the 6.2 million square foot factory that produces a number of BMW models that are assembled and shipped out worldwide.

We warmed up with a quick lunch and brief overview of what we would be doing with two incredibly skilled BMW instructors, Guiness Book of World Records holder, Johan Scwhartz and accomplished racer Laura Hayes. We would eventually split up into two groups. Group A would head towards the off-road experience for some all-terrain fun and Group B would head towards the tracks to hit high speeds and challenges to test how these luxury vehicles handle.

The off road course consisted of Moonlighters pushing the BMW X-5 to the limit on a series of steep embankments, challenging descents and even balancing these performance machines on two-wheels at one point. The name of the game on this course was quite the opposite of speed. It was all about finesse!

The street course is where the real competition took place. To warm things up, each group had the opportunity to get behind the wheel of five different models ranging from the M2, the M4, the 850i, etc. We started out running each model a few laps through a series of short straightaways and short turns, reaching speeds upwards of 100 mph.

Next, it was on to the timed circuit course where the real fun was had. Each Moonlighter got behind the wheel of an M4 and was given the opportunity to run six timed laps, going through a series of slaloms and challenging turns. Their fastest, cleanest lap (not hitting any cones or coming to a complete stop outside the designated finish line) would be counted as their best lap. If we didn’t already know before, we found out today that Moonlighting is one competitive group!

In the end there were only three spots on the podium. First place was taken by Installation Tech Ricky Eckert, second place by Installation Foreman Mike Ned and third place by Moonlighting President Mike Rollins.

To end the day, we each had the opportunity to hop in with Johan and Laura and they took us on a “hot lap” where we reached high speeds, quick turns and even a drift lap on the very course where Johan set his world record of the longest consecutive drift. We’re not sure any of us knew what to expect when we got in the cars with our instructors, but it was by far the fastest and most extreme driving that any of us could have even imagined.

The competition continued that evening at the Stone Pin Company in downtown Greenville where we turned in our driving gloves for bowling shoes. In the end, it was a clean sweep for Ricky as he took first place on the track and first place on the bowling lanes, bowling the highest score for the evening. Congrats, Ricky!!

We would cap the trip off the next morning by taking an exclusive tour of the BMW Plant and learned first-hand the assembly process from start to finish of several BMW models. Following the tour, we got to wander through the BMW museum and the history of these automobiles.

What a trip this was and what a way for everyone to have a little company bonding outside of the office! To see some highlights of our trip, check out our video below.

Congrats are in our order for Moonlighting’s own Sandy Harris, as he just earned his Master Residential Electrician’s license!

Sandy has been with Moonlighting for ten years now and has earned the in-house title of Moonlighting “Swiss Army Knife.” Whether it’s performing routine maintenance on a lighting system, troubleshooting a complicated electrical issue or installing a specialty fixture, Sandy can do it all!

for the last 4 1/2 years, Sandy has been working overtime by attending evening classes at Trident Technical College with the goal of becoming a certified electrician. Sandy’s hard work paid off last week after he passed his exam and officially earned that title!